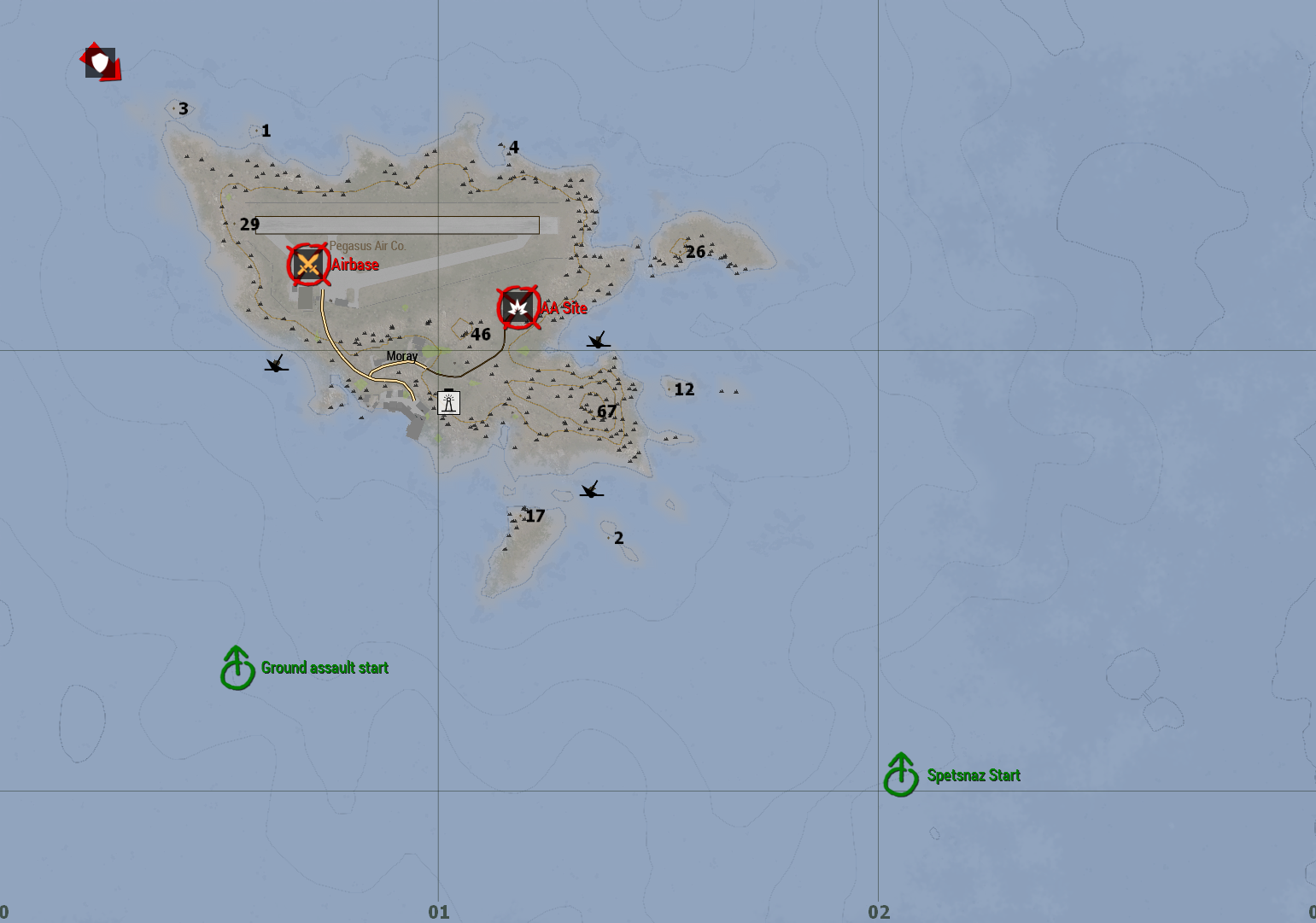 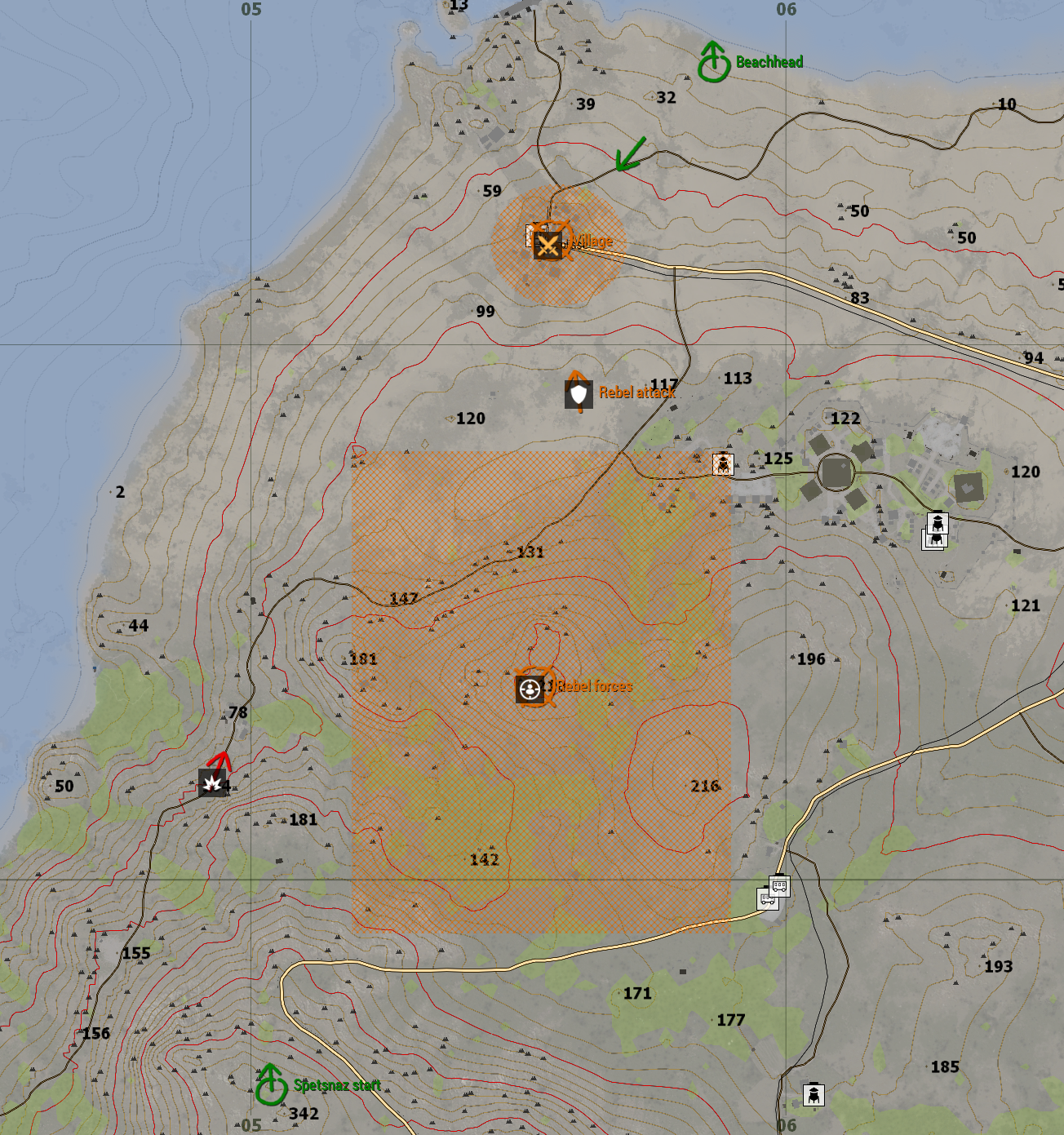 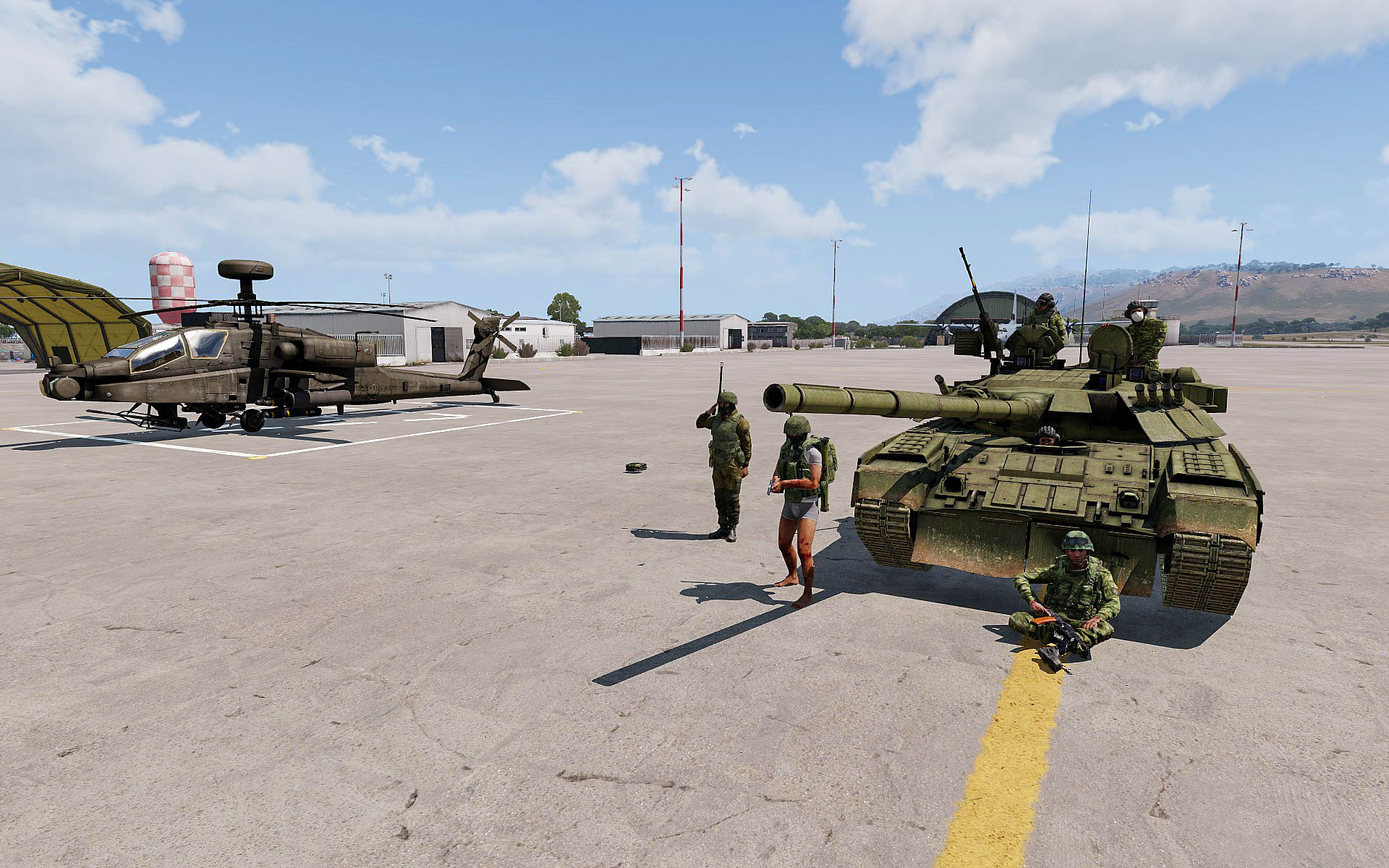 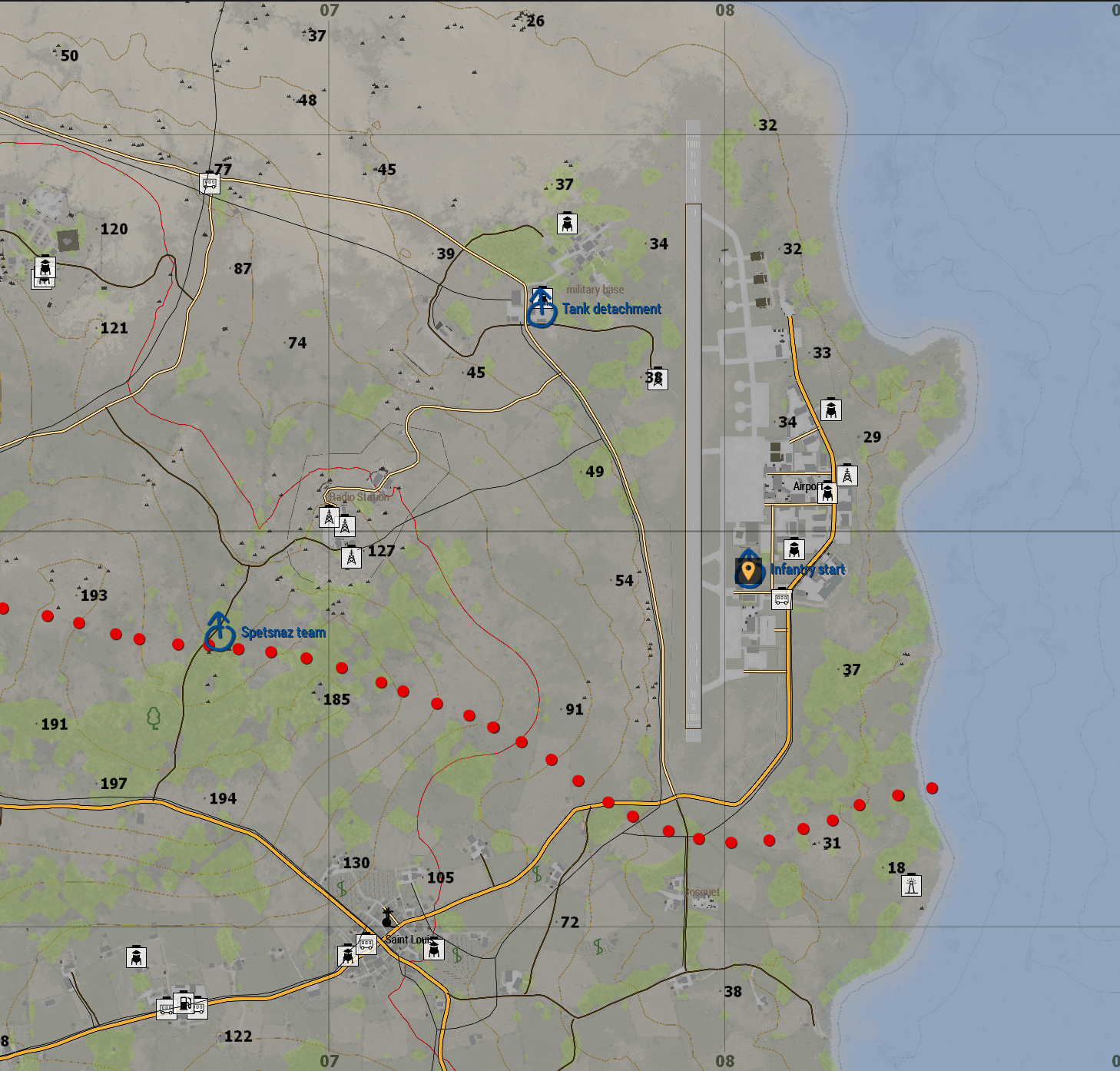 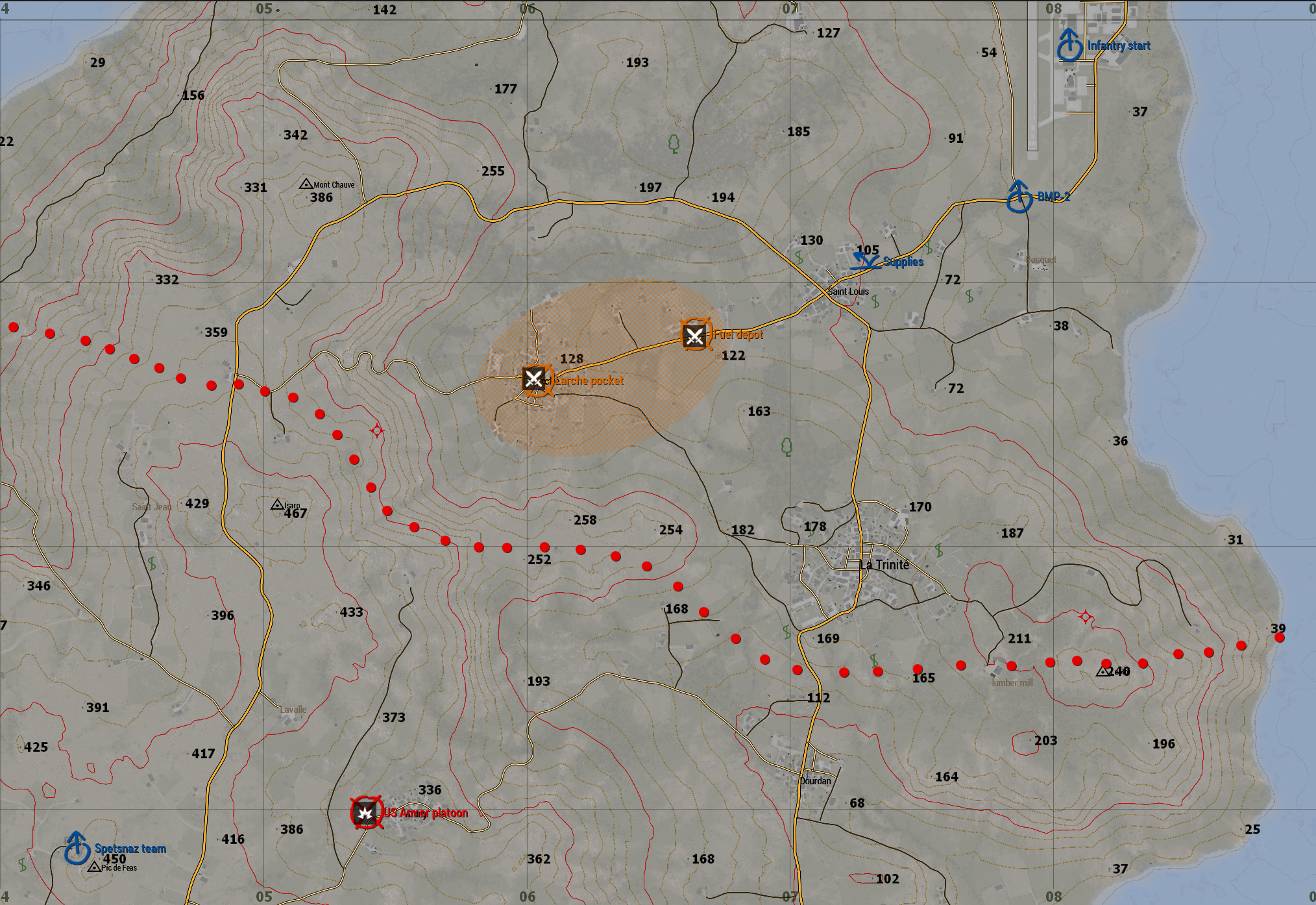 SITUATION: Hopefully you had enough rest after the American surprise assault two days ago, since strength is now needed to give NATO and their Resistance friends a crushing blow.

The front line has been pushed further south as other 66th Guards units have exploited the holes you previously hammered into enemy lines. Resistance forces have been squeezed into a huge pocket in the Larche valley. They have refused to surrender and are going to fight to the last man. Your mission is to eliminate this thaw in our flesh!

The infantry squad starts at the airport and is transported to a waiting BMP crew. The undercover Spetsnaz team is in a farmhouse behind enemy lines, wearing civilian clothes.

US Armor platoon stationed south east on Larche will support resistance fighters if Larche is under attack. Those tanks must be destroyed!

NOTES: A decent night sleep and some off-duty fun really did miracles to our boys' morale. Our platoon had a day off in the sun at the sand beaches in the north. On thing everyone cracked jokes about was the absence of sun-bathing Maldenese chicks. Most of them probably had packed their bags and headed south with the fleeing NATO troops I bet. Maybe us Russian grunts are not hot enough in their eyes... Damn, better not think about girls. Anyway. this morning we meet the 'old man' himself, General Guba, the Hero of the Soviet Union. I heard that in his teens he fought in the Great Patriotic war as tank gunner, in the 60s he served as an adviser to our comrades in North-Vietnam and in Afganistan he was a armor colonel, commanding a tank regiment. Now he's leading this expedition. Though he's stubborn and demands a lot, you still gotta respect the bastard...at least he has seen combat unlike some generals who are favored by Moscow's politicians.